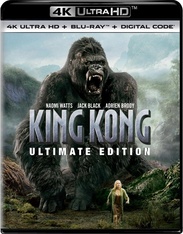 Documentary filmmaker Carl Denham sails off to remote Skull Island to film his latest epic with leading lady, Ann Darrow. Native warriors kidnap Ann to use as a sacrifice as they summon Kong with the local witch doctor.

But instead of devouring Ann, Kong saves her. Kong is eventually taken back to New York to be exploited as the 8th Wonder of the World where he searches high and low for Ann, eventually winding up at the top of the Empire State Building, facing off against a fleet of World War I fighter planes.

Rated PG-13 for frightening adventure violence and some disturbing images.