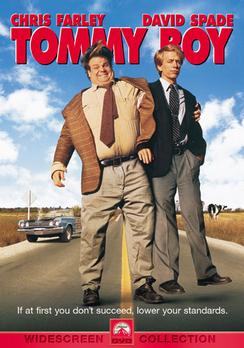 OK, I'll admit this post is only tangentially associated with movies. I've been battling the flu for the past few days so I'm hoping you'll give me a free pass.

DirecTV has been running a series of TV ads which take a classic film and insert the present-day actor with new dialogue that promotes their satellite services. They've produced commercials featuring Charlie Sheen in Major League and Sigourney Weaver in Alien. Aside from messing with some great flicks, no big deal really.

That is, until recently when they did a send-up of Tommy Boy featuring David Spade and the late Chris Farley.

I saw the Tommy Boy DirecTV ad for the first time last night. Even in my flu-striken haze I thought it was in extremely bad taste.

Apparently I'm not alone. According to a story Matt Ufford on Yahoo's TV Blog, lots of people are logging their complaints against the new commercial.

As Ufford mentions, it's not the first time DirecTV has used a deceased actor in the ad campaign. Craig T. Nelson and late child actor Heather "They're heeere!" O'Rourke appear in a Poltergeist themed spot.

I'm willing to bet that many don't even know that O'Rourke died in 1988 of natural causes. On the other hand, most everyone of a certain age knows that Farley died of a drug overdose in 1997. Not only that but Farley was a beloved figure.

According to Asylum.com, Farley's family did sign-off on the ad. Spade is quoted, via a statement, that he thought the commercial "would be a cool way to remind people just how funny Chris was. It is a clever homage to my friend and a movie that we loved doing."

It helps knowing that the Farley clan gave their blessing but I can't let off his buddy Spade so easily. Nuttin' like hawking TV programming while abusing your late friend.

What do you think? Is this Tommy Boy ad in bad taste? Should DirecTV pull the ads? Send in your thoughts.

We've gotten an overwhelming number of responses to this story. While I haven't taken the time to officially tally the results, I think the feedback is split down the middle. Half of you agree with me on the distasteful nature of the ad. The rest think it's much ado about nothing.

In hindsight now (and feeling much better, thank you very much) I do think I overreacted a bit. It's not like Farley's family made a movie out of his final rehearsals or something.

Here are my two favorite comments on the subject:

DirecTV ad does not bother me a bit. I've been spoofing that same sentence for years. "Fat cat in the little box" I sing to my fluffy cat, however I do not sing "Fat husband in the Laz-e-boy" since I prefer to sleep indoors.
-- Amy

Funny, DirectTV aired an ad with Naomi Watts and King Kong atop the Empire State building just minutes before King Kong's death, yet no one complained about that...not even PETA! Maybe huge, dead guys are a commodity.
-- Steve