Sniff! All the movies that make guys cry 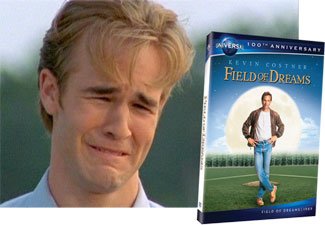 Men are tough. At some point in adolescence we get the memo that guys aren't supposed to cry. Showing our emotions is a sign of weakness, they say. Or at least that's how it is perceived.

Of course that's all a load of hogwash. Men cry. It's OK to admit it. But I think it's safe to say we cry less than the other gender. Nothing against the ladies. It just takes an awful lot to get us dudes to shed a tear. As with movies, there must be some pretty serious circumstances to get the waterworks going.

Growing up, I can't recall crying at a single movie. It's not like I was a tough kid -- quite the opposite actually. Perhaps I just wasn't exposed to tearjerkers. As an adult I can recall a dozen or so movies that brought me to tears. More than not, those instances happened while watching a movie alone.

It's a Wonderful Life - I vividly remember crying at the heartwarming moment when George Bailey is saved by friends and they all sing "Auld Lang Syne." Even now watching the film for the umpteenth time, I choke back a tear.

Bicentennial Man - I'm not exactly sure what did it to me in this movie. The notion of Robin Williams as a mechanical android doesn't seem very sentimental but it worked for me.

8 Seconds - I balled at this movie. I'm by no means a cowboy and western type but this true story of bull rider Lane Frost had me a weeping mess. I think it was the father-son aspect of the film but looking back I'm a bit ashamed to say I cried at a Luke Perry movie.

I put out the call for submissions on Twitter and Facebook. You guys responded with lots of great picks. Trying to make some sense of them all, I noticed a few common themes.

Dogs. Lots of guys mentioned the perennial guy-cry movie Old Yeller. The 1957 Disney flick shows how strong the bond is between man and canine. The modern film Hachi: A Dog's Tale with Richard Gere got numerous votes. Facebook-er Brian M. said "HACHI was so sad I don't think I could [ever] watch it again." Marley & Me was also mentioned to us a few times.

Sports. We men have a special connection with sports. When those touching stories are played out on the big screen, we don't have any control. Lots of people suggested Rudy. Same too with Remember the Titans and Friday Night Lights. And it's not just a football thing. The story of teamwork and redemption in Hoosiers gets me too.

Dads. Good ol' dad. The equally special bond between father and son gets tested in movies and it reduces us to crying little boys. Again, that's what got me with 8 Seconds. I know Frequency and The Pursuit of Happyness deserve mention for that reason as well. It can also be father-daughter stories. As Tim J. mentioned on Facebook, "Contact. Every single time Jodie Foster gets to spend time with her 'dad' on the beach."

Which leads me to the number one vote-getter in our little survey, Field of Dreams. This movie has produced more salty water than Bausch & Lomb does in a year. And it's easy to see why. It combines two of the key cry-factors: dads and sports. Had a dog died in Field of Dreams, the world would have flooded. Jeff S. told us on Facebook, "The 'Hey Dad, want to have a catch?' scene in does it to me every time."

Of course dogs, dads and sports aren't the only things that make us cry. We can be romantic sometimes. The Notebook, Hope Floats, and Armageddon were all submitted to us. Oh, and Up. If you don't cry during that first act of Up, you don't have a heart.

We got a lot of joke responses to our poll of guy-cry movie. Twitter guy @josejborbon said he cried when Transformers raped his childhood memories. I even got a tongue-in-cheek response from my cohort John. The one movie he cried at, appropriately enough, was The Crying Game. I guess that surprise ending really moved him.

Hopefully this article itself hasn't had you reaching for the Kleenex in memory of these sad films. If it has, I offer something to lighten the mood. One of my favorite YouTube comedy puppet duos Glove and Boots has offered up their Nine Movies That Make Men Cry. Give it a watch. (Mild spoiler warnings may apply.)