Review: The 'Doctor' is in for latest Marvel film 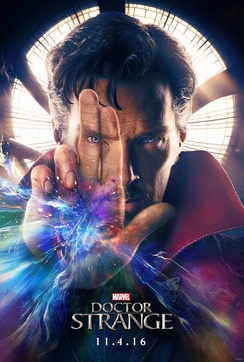 It has been pretty well documented that my comic book background is rather lacking, but that doesn't mean that I can't appreciate great stories and strong characters. In fact, I feel that my lack of comic book experience is a strength when it comes to watching and evaluating comic book movies.

I don't bring preconceived DC vs. Marvel feelings into the discussion and I just look the films on face value. That being said, Marvel has been kicking DC's proverbial backside since Iron Man debuted in theaters nine years ago. Of course, I still think that The Dark Knight remains the best comic book story ever to appear on the screen.

Before that first film, I had no idea who Iron Man was, but now he is as synonymous to Marvel for me as Captain America or The Incredible Hulk. Doctor Strange is technically the 14th film in the MCU, but in many ways, it shares a lot in common with the first film, Iron Man. As one of the first films of the third phase of the MCU, it is the first one to really dabble in the mystical side of the Marvel universe.

Sure, the idea has popped up on Marvel's myriad of TV properties, but from a film standpoint, almost everything up to this point has been grounded in the reality of the physical world. Whether it was through mechanical apparatus, super-soldier serum or alien-enhanced powers, the strength of The Avengers was based on science.

With Thanos and The Infinity War looming, it was only necessary that we would have to cross over to the spiritual and metaphysical realms at some point. The challenge lies in melding the existing physical heroes with the spiritual ones, but thankfully, Marvel has excelled at weaving multiple story arcs together across several films. In fact, through its legendary credit sequences for Doctor Strange, they not only set up its own sequel but also provide a nice segue into Thor: Ragnarok later this year.

But, I'm getting far ahead of myself.

I've noticed one major difference between the comic books and their big screen versions and that's how they handle the introduction of new characters. In comic books, new characters are often introduced as fully realized heroes or villains. Their backstories and origin tales are revealed slowly over time, but you don't have that luxury in a film.

In fact, the only comic book film that I have seen pull it off was Deadpool and the gimmick of starting the film in media res was a strong selling point to the film itself. It was big risk, but one that definitely paid off for Deadpool. Marvel has played it more conservatively and I think that was also the right move for them.

The typical audience in a movie theater for a comic book movie is made up of both die-hard fans and people like myself that are going in without any previous information on the character. So, how do you appease both sides of the crowd? Well, Marvel has it down to a science.

In Doctor Strange, they don't begin the film on the titular character, choosing instead to get right into the mystical aspects of this universe. This helps to set the expectation levels of non-fans while also giving die-hards an established action sequence up front.

After the setup, we meet Benedict Cumberbatch's Doctor Strange and he's as arrogant and despicable a person as you would expect from a top neurosurgeon in the world. Basically, he's a grade-A asshole and yet, at some point, we're supposed to cheer for him to defeat evil. This is yet another thing in which Marvel really excels.

I think lesser comic book movies fail because they only present heroes and villains as one-dimensional cardboard cutouts of good guys or bad guys. Heck, why not just have them wear white or black hats and be done with it? Marvel opts to present characters with a real arc to their story and ones that have to earn our applause. This really forces the audience to buy in and go along for the ride with the character.

I'll be honest, I wasn't the biggest Benedict Cumberbatch fan before watching this film. I had seen him in a hand full of things, but I never really understood his drawing power. It's safe to say that after watching Doctor Strange I can understand why filmmakers pushed back their production schedule to get him in the titular role. Again, not only do you have to have a compelling character arc to follow, but you need impressive actors that can deliver the range of emotions to make it believable and Marvel has been real lucky in their casting thus far.

There was some controversy surrounding the film when it was released in theaters about the casting of Tilda Swinton as The Ancient One. Again, as someone with no knowledge of the comic book, I didn't find her inclusion as offensive and bought their explanation of her as being Celtic in origin on face value. Apparently, many felt that her casting was a sort of a white-washing of an Asian character, and there might be some merit to it.

However, I found that having a strong female character in the role of the teacher not only brought some parity to the pronounced male cast, but it helps to balance out the power in comic book movies as a whole. Let's be frank, women have gotten the short stick when it comes to having strong comic book superheroes to look up to, which is why I'm really looking forward to this summer's Wonder Woman.

Given the multi-dimensional aspect of the story and the mystical plot devices, Doctor Strange had an opportunity to really bend reality and they sure took advantage of it. In many ways, Doctor Strange looks like it could be a sequel (if not in the story, then visually) to Inception.

The good thing is that filmmakers struck a good balance between reality and warping our perceptions. It would have been really easy for them to get lost down their own rabbit hole and lose us along the way, but they always seemingly knew when to pull back.

You know, it's funny, I give Disney a great deal of grief over their decision not to support the 4K UHD Blu-ray format (yet), but they certainly know how to leverage the Blu-ray format for all that it's worth. Not only does the film look great (upconverted on my UHD player and 4K TV), but the Blu-ray is overflowing with lots of fun goodies.

After watching the film, I was eager to explore all of the featurettes and deleted scenes. Not only is this a good sign that I enjoyed the film, but it also allows me as a comic book novice to get more educated on the character. You know that Doctor Strange and these concepts are going to pop up in future Marvel films, so it's great to see Marvel sticking some great content on the Blu-rays.

If you're a true fan of Marvel, then you'll want to especially check out their sneak peek at other upcoming films from Phase 3 of the MCU. There was plenty of footage that I had never seen before and it really just gets me pumped for the other Marvel films coming out their year.

With Marvel and now Star Wars, Disney really has the opportunity to keep this well-oiled money-making machine going for a long time. The key to their continued success will be great content presented in compelling ways and so far, so good. I thought that maybe Marvel would show some signs of slowing down in the next couple of years, but I'm pretty sure that they are just getting started.

Doctor Strange is now available on DVD and Blu-ray.