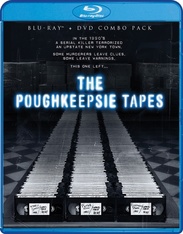 From the filmmakers that brought you Quarantine and As Above, So Below comes a descent into the twisted crimes of a serial killer! Throughout the 1990s, a serial killer terrorized upstate New York. After a decade-long crime spree conducted largely under the radar of law enforcement, the killer left behind the most disturbing collection of evidence homicide detectives had even seenhundreds of homemade videotapes that chronicled the stalking, abduction, murder and disposal of his victims. The Poughkeepsie Tapes examines these horrific tapes at length: what they reveal about the killer, why they were made and how FBI profilers have used them to better understand violent, psychopathic behavior. The Poughkeepsie Tapes combines interviews surrounding the devastating impact of the "Water Street Butcher," with shocking footage from the tapes themselves.

Rated R for sadistic violence and torture, including terror and graphic descriptions.