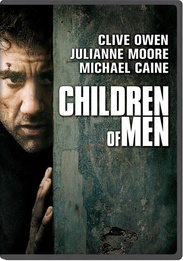 A futuristic society faces extinction when no children are born and the human race has lost the ability to reproduce. England has descended into chaos, until an iron-handed warden is brought in to institute martial law.

The warden's ability to keep order is threatened when a woman finds that she is pregnant with what would be the first child born in 27 years.

Rated R for strong violence, language, some drug use and brief nudity.