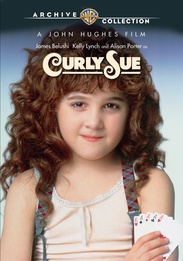 Chicago. Another town, another scam for vagabond Bill Dancer (James Belushi) and the curly-topped orphan (Alisan Porter) he's raised since infancy. This time, Bill hits the jackpot: His newest con whisks them both from the poorhouse to the penthouse with lots of laughs along the way. From hitmaker John Hughes, Curly Sue also stars Kelly Lynch as an attorney who falls for the plotting pair and takes them home. It's all too good to be true, until her jealous boyfriend (John Getz) intervenes. Pat Collins of WWOR-TV/New York pronounced Curly Sue "a feel-good comedy," and with Hughes' wisecracking wit and tender touch, it's a prize entertainment for one and all.