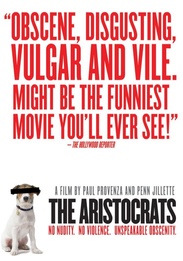 Paul Provenza and Penn Jillette have made the funniest movie ever, because it has more funny people than have ever been in one movie before. A labor of love three years in the making, encompassing more than 100 comedians and culled from over 100 hours of footage, Provenza and Jillette shot the documentary holding DV cameras in their own hot little hands and edited it at home on a Mac. As fellow comedians, Provenza and Jillette got their cameras rolling where no real filmmaker could ever go. They let us see how professional comedians talk after their sitcoms have wrapped and the audience has gone home.

The result is a heartfelt, private, unprecedented backstage look at famous comedians playing around. Provenza and Jillette got superstar comedians being funny for other comedians, and that is really no-kidding funny. They also captured a performance portrait unlike any other: The art of comic improvisation.