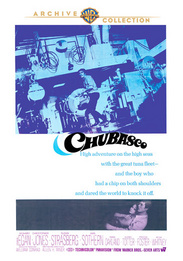 After assaulting a cop during a beach party blowout, teen rebel Chubasco (Christopher Jones) gets two choices: do time for the crime or join the crew of a high seas clipper and face the inherent risks of commercial fishing. Choosing the latter and before boarding ship, Chubasco elopes with girlfriend Bunny (Susan Strasberg) and then finds himself on a tuna boat skippered by the one man who'd rather see him dead: Bunny's irate father Sebastian (Richard Egan). When Sebastian learns his new deckhand's identity, tensions rise with the tides -- and only one man may return to Bunny's waiting arms. A solid movie debut for Jones, soon to achieve greater fame in Wild in the Streets, Three in the Attic and Ryan's Daughter, this scenic romance also boasts a seasoned supporting cast: Ann Sothern, Audrey Totter, Preston Foster and Simon Oakland.