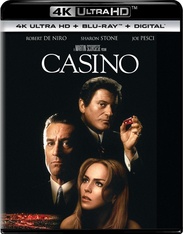 In an era of over-the-top glitz, Sam "Ace" Rothstein is riding high as front man for the Mob's multi-billion dollar Las Vegas operation. To protect their "investment", the bosses send in Ace's boyhood pal, hot-headed enforcer Nicky Santoro. It's a winning hand: Ace's brain and Nicky's muscle - until sexy wild card Ginger McKenna turns up the heat.
This gripping fact-based tale boasts extraordinary performances, a sizzling soundtrack and a dizzying look beneath the glamorous facade, beyond the closed doors and behind the eyes of the men and women whose fortunes -- and lives -- were made and lost with the roll of the dice.