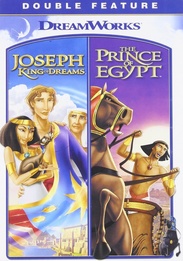 Joseph King of Dreams From the filmmakers who brought you The Prince of Egypt comes an epic, inspiring musical adventure about a boy (voiced by Ben Affleck) with the extraordinary gift of seeing the future through his dreams. This timeless treasure features five memorable songs, sparkling animation, and "storytelling at its very best" (Alice ONeill, Los Angeles Feature Syndicate). The Prince of Egypt The timeless tale of two brothersone born of royal blood, one an orphan with a secret pastis brought to life in this Academy Award®-winning epic adventure. Growing up the best of friends, the two share a strong bond. But the truth ultimately sets them at odds, as one becomes the ruler of the most powerful empire on earth, the other the chosen leader of his people. Their final confrontation will forever change their lives  and the world.