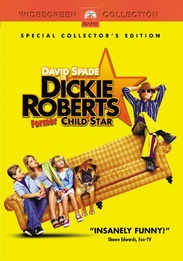 Dickie Roberts is a 35-year old former child star. Now an out-of-work actor turned parking valet, Dickie is desperate to audition for a great role that could revitalize his career, but the part requires him to play a "normal" guy. Problem is, Dickie is anything but normal. He decides to hire a family to adopt him so he can relive his childhood and, in essence, grow up from scratch.