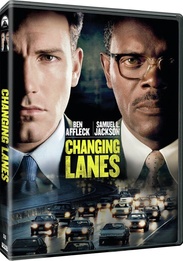 During the early morning commute into Manhattan via the FDR, two completely opposite men have a small accident. The lawyer is in a rush to make a court date and offers the other man a blank check as compensation and takes off. The other man is left to fend for himself and as a result is late for a child custody hearing and loses custody of his sons. At the scene of the accident, the lawyer dropped an important file to his case and the other man has it. Now, the chase is on to see which man will flinch first.