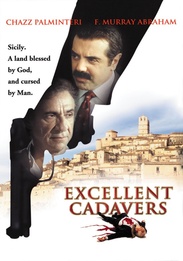 Based on an explosive true story - only a fearless man would take on the Mafia in their home territory of Sicily. Those who die trying are called ' 'excellent cadavers.' ' But for Giovanni Falcone (Chazz Palminteri), it becomes an obsession for which he will risk his career, his marriage - and maybe even his life. Falcone finds himself targeting the Mafia when he uncovers mob ties to drug-dealing, government pay-offs and murder. But his biggest brek comes with the arrest of tommasso Buscetta (F. Murray Abraham) known as the "Godfather of Two Worlds." In exchange for falcone's promise of security, buscetta exposes the inner workings of the mafia and the secret multi-family commission that threatens the livesof all who seek to imprison them. Armed with that information, Falcone plans a massive assault on the crime families resulting in a trial with nearly 500 defendants and over 1,000 lawyers and witnesses, There is more than Falcone's career on the line, as every moment brings him either cloer to victory or closer to joining the growing list of Excellent Cadavers.