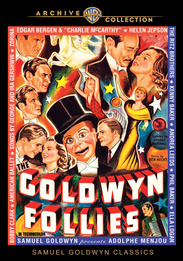 This "lavish" (Variety) musical spectacle filmed in lush Technicolor that the LA Weekly raves is "astoundingly polished" features imaginative sets, brilliant costumes and the unsurpassed music of George and Ira Gershwin, including hits like "Love Walked In," "Spring Time" and "Love Is Here to Stay." Adolphe Menjou stars as Oliver Merlin, a big-time movie producer whose films have lost mass appeal. To get back in touch with the "little people," Merlin hires simple country girl Hazel Dawes (Andrea Leeds) to act as his ear to the public...but he soon falls in love with her. And when shy crooner Danny (Kenny Baker) becomes smitten with Hazel as well. Merlin woos her with the thrilling glamour of Hollywood.