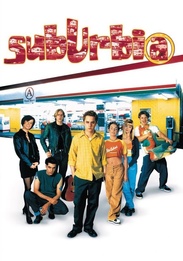 Filmmaker Richard Linklater (Boyhood, Before Midnight) explores the lives of young Americans at a crossroads in subUrbia, adapted by Eric Bogosian (Talk Radio) from his play. It rocks with soundtrack music by Sonic Youth, Beck, Skinny Puppy, Butthole Surfers, Elastica and more of the '90s' edgiest alternative bands. An ensemble cast featuring Parker Posey (Party Girl), Steve Zahn (That Thing You Do), Nicky Katt (A Time to Kill) and Giovanni Ribisi (Friends, Lost Highway) stars in this engrossing story that opens during a typical night among friends who are stuck somewhere between high school and the rest of their lives. The night doesn't stay typical for long. The arrival of a former classmate who is now a rock star sets passions and conflicts in motion. Before the night is over, friendships will be forged or shattered, romances will be won or lost, limits will be tested, and futures will be shaped.