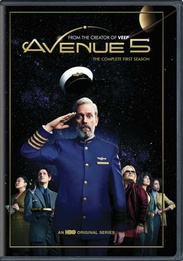 All aboard for a hilarious journey across the universe in this HBO comedy series from Armando Iannucci (HBO's Veep). Set 40 years in the future, when traveling the solar system is a booming business, Season 1 follows life on board Avenue 5, a mash-up of a cruise ship and an interplanetary rocket ship that's packed with luxury amenities. Among the 5,000 passengers and crew are the ship's suave captain, Ryan Clark (Hugh Laurie); billionaire Herman Judd (Josh Gad), the mercurial face and name behind Avenue 5; his right-hand woman, Iris Kimura (Suzy Nakamura); and the head of passenger services, Matt Spencer (Zach Woods). When the ship suddenly encounters technical difficulties, it's up to Ryan and his crew to find a way to deal with unexpected events -- though they may or may not be equipped for the task.