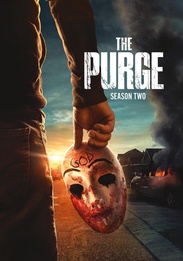 Based on the hit movie franchise, The Purge revolves around a 12-hour period when all crime, including murder, is legal. Season 2 explores how a single Purge night affects the lives of four interconnected characters over the course of the ensuing year, all inevitably leading up to the next Purge. From Blumhouse Television and UCP, the second season of the anthology series opens on Purge night but dives deeper than ever before in to what the Purge world looks like the other 364 days of the year.