The Quake / The Wave 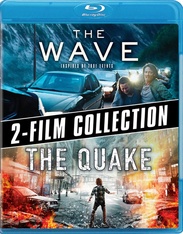 THE WAVE: After working several years at an earthquake early warning center in Geirangerfjord, geologist Kristian Elkjord (Kristoffer Joner, Mission: Impossible - Fallout) is moving on to a prestigious new job. On the very day he's to drive his family to their new life in the city he senses something is wrong-the bedrocks are shifting. The resulting landslide from the mountain sends tons of rock and earth crashing into the water; every soul in the town has ten minutes to outrace the tsunami.

THE QUAKE: After surviving The Wave, Kristian Eikjord (Kristoffer Joner, The Revenant) and his family find themselves at the center of another natural disaster. This time, the ground beneath Oslo, Norway can't be trusted. The Quake follows Kristian as he makes a perilous attempt to help his wife, daughter and others escape a crumbling skyscraper when nature takes its course again.