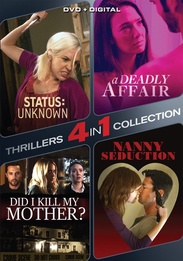 Love, betrayal, revenge and remorse. Everyone's a suspect when passions run high and the results are deadly in this thrill-a-minute movie collection.

Status Unknown  2014  Not Rated  Stacey Oristano, Stephen Colletti, Bea Grant, Hilty Bowen
Three friends reconnect at their high school reunion, and agree to stay in better touch with one another. This works out well initially, but when two of the friends start noticing odd updates they begin to suspect something might be very wrong.

Nanny Seduction  2017 - Not Rated  Wes Brown, Erin Cahill, Valerie Azlynn, Austin Highsmith
Ben and Kara Turling are a couple and have an adopted daughter-Riley. Ben is trying to gain the trust of his wife back after cheating on her some time ago. A part of Kara is willing to trust Ben again while another part of her is reluctant to do so, especially whenever he returns home late from work. One night, their daughter Riley gets kidnapped and in the process of trying to know who the perpetrator is, another hidden secret of Ben is revealed. Would this secret tear the couple apart or will it make them stronger?

Did I Kill My Mother?  2018  Not Rated  Megan Park, Austin Highsmith, Dane Rhodes, Stephen Colletti, Miles Doleac
A year after her father's unsolved, suspicious murder, a young woman's mother is found dead in the home they both live in. The police think she may be the murderer, and she and her friends have to prove her innocence, while they dig deeper into the real killer's hidden life.

A Deadly Affair  2017 - Not Rated  Valerie Azlynn, Alan Powell, Luke Edwards, Austin Highsmith
Suspecting her husband of having an affair, a woman trails him to the house he's been renovating only to discover he's dead. As the investigation unfolds, things are not always as they seem.