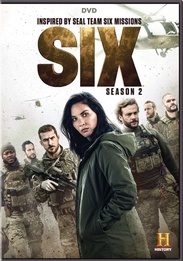 After an explosive Season One finale, SIX follows our team of SEALs as they deal with the aftermath of Rip's shooting while hunting down the terror group responsible for the attack. The SEALs join forces with a cunning and tenacious CIA agent, Gina Cline, who has Michael Nasry under fierce interrogation. Together, the crew scours Eastern Europe, infiltrating hostile territory across Russian borders while tracking a mysterious figure known as "The Prince." Back in Virginia Beach, Rip's killer, the radicalized Marissa Wyatt, hatches a new plan of attack to strike the homeland once again.