The Grace of Jake 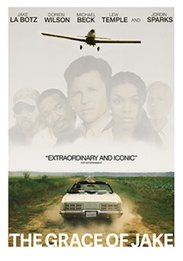 Ex-inmate and musician Jake Haynes (Jake La Botz  True Detective, Rambo) steals a car and travels to rural Arkansas hell-bent on exacting revenge on his father Henry (Michael Beck  Warriors, Xanadu), who abandoned him, but his plan begins to unravel as he discovers a complicated family history among the cotton fields and gospel churches. Through the help of locals like Alvah (Lew Temple  Walking Dead, Lawless) and Maurice (Ravi Kapoor- The Brink, Crossing Jordan) and finally through a forbidden romance with Nicole (Jordin Sparks  American Idol, Sparkle), he comes to understand the complexities of family and the virtue of forgiveness.