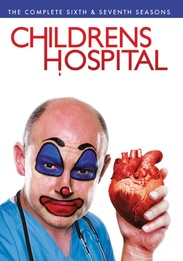 The Emmy -winning comedy continues (and finishes)! After spending last season in Japan, the gang is back at Childrens Hospital for season 6, and fans can expect absurdity, flights of fancy, hard-hitting fake drama, soft-hitting fake drama, farcical door slamming, partial nudity, classical jazz, 70-yard field goals, mustache rides, backward messages, grooming tips... and so much more. Like season 7! Where the doctors are in and so are their grandparents. Where a horse is wanted by the mob, a salacious art show exhibits the peculiar works of enigmatic cast member Just Falcon (if you know you know) and, occasionally, a sick kid receives some version of medical treatment. Plus, big questions are answered, including: What's it like to live in a world without tongue depressors? What's really inside Chief's hump? Is the series actually based on a sketch from a 1950s variety show? Which religion is the right one? The season culminates with a sneak peek at the never-before-seen, completely crowd-funded Childrens Hospital Movie. You won't want to miss a single second. Especially the 5,402nd second -- that one is really great. Rob Corddry, Lake Bell, Erinn Hayes, Rob Huebel, Ken Marino, Megan Mullally and Henry Winkler star.