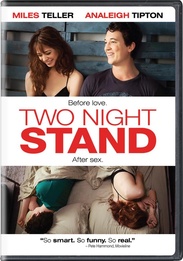 After an extremely regrettable one night stand, two strangers (Miles Teller and Analeigh Tipton) wake up to find themselves snowed in after sleeping through a blizzard that put all of Manhattan on ice. They're now trapped together in a tiny apartment, forced to get to know each other way more than any one night stand should. Marking the directorial debut of Max Nichols, and with a screenplay by Mark Hammer, TWO NIGHT STAND also stars Jessica Szohr, Leven Rambin and Scott Mescudi.

Rated R for sexual material, language and some drug use.