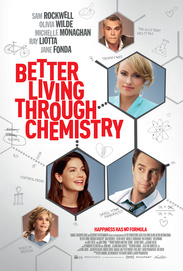 Doug Varney (Sam Rockwell) is the model of suburban respectability-until the night he delivers a prescription to the home of Elizabeth Roberts (Olivia Wilde). Gorgeous, seductive and multiply addicted, Elizabeth eagerly introduces Doug to extra-large martinis, uninhibited bedroom behavior and the illicit pleasures of the pharmacopeia he has access to in his store.

Disregarded for years by everyone from his domineering wife Kara (Michelle Monaghan) and troubled son Ethan (Harrison Holzer), to the goldbricking employees at the drugstore he bought from his insufferable father-in-law (Ken Howard), Doug surprises himself by embarking on an exhilarating drug-and-alcohol fueled affair with the most glamorous woman he has ever met.

But his extracurricular activities quickly send his life spinning out of control when a routine DEA audit reveals serious discrepancies in his inventory. Convinced he's about to lose everything, Doug hatches an ill-considered scheme with Elizabeth that will allow to them to have it all-at an almost unthinkable price.