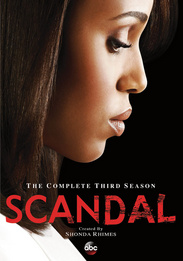 Forget everything you thought you knew about who to trust...and who to fear. The suspense ratchets up as secrets are revealed, loyalties are tested, and dark truths come to light in ABC's "Scandal: The Complete Third Season."

Watch the intensity unfold in all 18 episodes of "Scandal's" riveting third season. Then, delve deeper behind the intrigue with exclusive, never-before-seen bonus features only available on DVD.