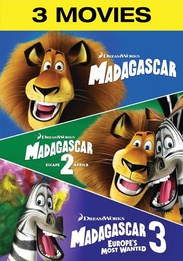 In Madagascar, the laughs begin when a group of pampered animals from New York's Central Park Zoo find themselves shipwrecked on an exotic island. Their adventure continues in Madagascar: Escape 2 Africa where the friends encounter other animals of their own kind for the first time, and in Madagascar 3: Europe's Most Wanted, where the castaways tour with a circus of performing animals. Available together for the first time on Blu-ray, this collection features Hollywood's hottest starsBen Stiller, Chris Rock, David Schwimmer and Jada Pinkett Smith who lend their voice talents in these "Mad"-cap family favorites.