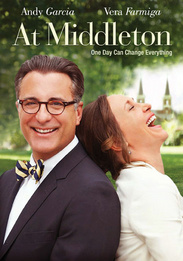 It's not only teenagers who find themselves when they go off to college. Two brilliant actors best known for dramatic roles join forces in a romantic romp, and they have a ball. Vera Farmiga and Andy Garcia play strangers who meet while escorting their teen children to campus-tour day at a mythical college named Middleton (the film is in part a hilarious parody of American college life).

Rated R for drug use and brief sexuality.