How To Save A Marriage And Ruin Your Life 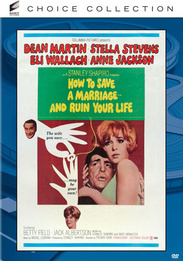 In this fun and breezy comedy about the battle of the sexes, carefree bachelor David Sloane (Dean Martin, Rio Bravo) tries to convince his best friend, Harry (Eli Wallach, The Godfather: Part III), to stop cheating on his wife by suggesting that his mistress is being unfaithful. David seeks out Harry's mistress to seduce her himself, but mistakenly meets Carol (Stella Stevens, The Nutty Professor), her next-door neighbor. What follows is a zany string of mistaken identities, misunderstandings and comic adventures leading David and Carol in and out of love. Newly remastered.