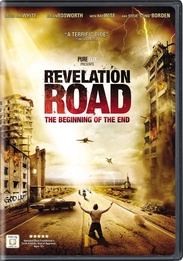 Josh McManus, a traveling salesman with a history of violence, was passing through a dusty West Texas town. The right man at the wrong time, Josh foiled a robbery perpetrated by The Barbarians, an outlaw biker gang led by a vicious man named Hawg. Then it happened. An unnatural flash in the sky, followed by a crippling series of earthquakes, throws the entire world into chaos. Is it the long-awaited event called The Rapture? Â Josh doesn't care. Â His only goal is to get home to his family, but he'll have to fight his way through the Barbarians to do so. It will be a dangerous journey to the very center of his soul.