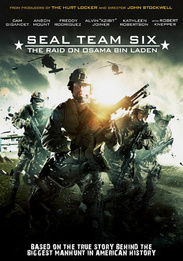 A break in the manhunt for Osama bin Laden serves as the backdrop for the gripping story about an extraordinary group of U.S. Navy SEALs who undertake the mission of a lifetime. Despite inconclusive evidence that bin Laden is inside the compound, and ignoring the possible ramifications of an unannounced attack on Pakistani soil, the Pentagon orders the attack. SEAL Team Six bands together in the most daring military operation of our generation, completing their mission of justice in a riveting final showdown.