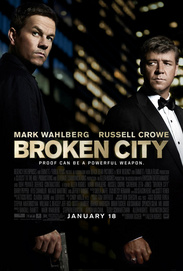 In a broken city rife with injustice, ex-cop Billy Taggart (Mark Wahlberg) seeks redemption -- and revenge -- after being double-crossed and then framed by its most powerful figure, the mayor (Russell Crowe). Billy's relentless pursuit of justice, matched only by his streetwise toughness, makes him an unstoppable force -- and the mayor's worst nightmare.

Rated R for pervasive language, some sexual content and violence.