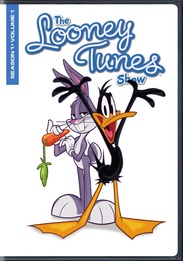 A new half-hour animated comedy series starring Bugs Bunny and Daffy Duck. No longer confined to 7-minute shorts, Bugs and Daffy are out of the woods and living in the suburbs among such colorful neighbors as Yosemite Sam, Granny, Tweety and Sylvester. In addition to each episodes main story, The Looney Tunes Show also features cartoons within a cartoon. The Tasmanian Devil, Speedy Gonzales, Marvin the Martian and other classic characters sing original songs in two-minute music videos called Merrie Melodies. The legendary Looney Tunes cartoons are getting a 21st century re-launch and a CGI overhaul for a new generation. The Looney Tunes Show debuts in the fall on Cartoon Network.