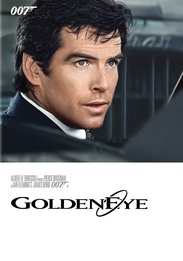 Times have changed. The Iron Curtain has fallen, giving way to a new world order, and the power plays of political agendas have been replaced by ruthless plots for profit. The war has changed... but the warriors remain the same. "The name is Bond, James Bond."
Ian Fleming's James Bond is back! Pierce Brosnan takes on the roll of the legendary Agent 007, as the most successful film franchise in history once again explodes onto the big screen.
Goldeneye is set firmly in the present day, swiftly changing political patterns turning old opponents into new best friends... and old allies into deadly enemies.

Rated PG-13 for a number of sequences of action/violence, and for some sexuality.