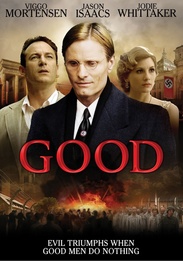 Based on the acclaimed play by CP Taylor, Good tells the story of an honest man facing a crisis of conscience in the most dishonest of times.

1930s Germany. Literature professor John Halder (Viggo Mortensen) channels his personal troubles into a novel that advocates compassionate euthanasia. When the book is unexpectedly enlisted by powerful political figures in support of government propaganda, Halder finds his career rising in an optimistic current of nationalism and prosperity. But the changes in Halder's fortunes correspond to an increasingly turbulent change in the political and social climate, and soon he finds himself confronted with the devastating effects of his seemingly inconsequential actions.