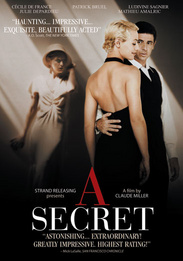 A SECRET follows the saga of a Jewish family in post-World War II Paris. FranÃ§ois, a solitary, imaginative child, invents for himself a brother as well as the story of his parents' past. But on his fifteenth birthday, he discovers a dark family secret that ties his family's history to the Holocaust and shatters his illusions forever. Adapted from Philippe Grimbert's celebrated truth-inspired novel "Memory, A Novel".