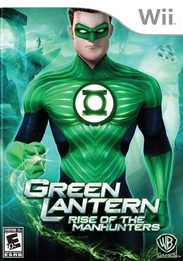 Harness the power of the ultimate weapon! Inspired by the upcoming Warner Bros. Pictures' superhero feature film Green Lantern, Green Lantern: Rise of the Manhunters soars onto game consoles this summer, extending the theatrical experience of one of DC Entertainment's most popular superheroes. Playing as gifted pilot Hal Jordan, the first human Green Lantern, gamers will create an arsenal of ring constructs and take flight in outer space and beyond to restore intergalactic order. Players will use the Power Ring to build an array of weapons from green energy to defeat the Manhunters - an evil android race bent on destroying the Green Lantern Corps. Enhanced Graphics and 3D Capabilities: The Nintendo 3DS version of the game is designed specifically to take advantage of the system's stereoscopic 3D capabilities and delivers multi-plane graphics that delve players further into the Green Lantern universe. Xbox 360 and PS3 gamers can play in anaglyphic 3D with technology that is compatible with all standard TV sets and visible while wearing the 3D glasses that come packaged with the videogame product. Fans can also enjoy the game in stereoscopic 3D when playing on any 3D HDTV while wearing active shutter glasses that are compatible with the television. Master the Green Lantern Power Ring - Take control of the most powerful weapon in the universe - the Green Lantern Power Ring - and conjure a spectacular range of "hard-light" constructs including a gatling gun, giant fists, and much more, all of which can be linked together to form an endless number of combinations. Team Up and Battle Together - Gamers playing the Xbox 360 or PS3 versions will have the ability to team-up and battle the Manhunters in seamless drop-in/drop-out local co-op gameplay as Hal Jordan or Sinestro. Take Flight - Soaring across the universe in intergalactic flight, gamers will dodge past asteroids and blast through planets while destroying armies of Manhunters. Ryan Reynolds as Hal Jordan - Green Lantern: Rise of the Manhunters for Xbox and PS3 includes the likenesses and voice talent of Ryan Reynolds as Hal Jordan.