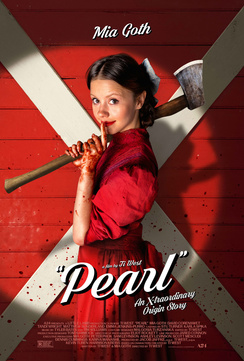 As many of you know, my love of horror has been rekindled recently as my tween daughter begins her journey in this wonderful genre. Since we are starting back in 1960 with Psycho and trying to work our way up in a lazy chronological order, it will be a while before she sees films from Ti West or Jordan Peele.

And yet, it's hard to keep her on track because these newer films are really leading to a renaissance of the genre. I have already seen a handful of fantastic horror films in 2022, but West's X might be the best of the bunch.

This week's new horror release Pearl is a prequel to X and again stars Goth as the titular character in 1918 Texas.

Filmmaker Ti West returns with another chapter from the twisted world of X, in this astonishing follow-up to the year's most acclaimed horror film. Trapped on her family's isolated farm, Pearl must tend to her ailing father under the bitter and overbearing watch of her devout mother. Lusting for a glamorous life like she's seen in the movies, Pearl finds her ambitions, temptations, and repressions all colliding in this stunning, technicolor-inspired origin story of X's iconic villain.

What I enjoyed most about Pearl and X is just how different the two films are. While X is a pure slasher ala The Texas Chainsaw Massacre, Pearl is more reminiscent of the technicolor musicals from the 1950s. Heck, there is even a musical number in the middle of the film that is so bizarre, yet fits into the narrative like a glove.

West filmed Pearl and X back-to-back and left audiences shocked when he announced the sequel and eventual release a couple of months after the release of X. It was a massive gamble that paid off handsomely as horror fans fell in love with Maxine and Pearl and wanted more of their stories. In fact, at the Toronto International Film Festival (TIFF) debut of Pearl in September, West announced a third film in the Mia Goth horror franchise called MaXXXine which should be out next year.

In fact, West went a step further and actually showed a teaser trailer for MaXXXine after the credits of Pearl at TIFF. With no footage from the film and only the words "Coming Soon" to note its arrival, it's not confirmed for a 2023 release, but I'd be surprised if A24 pushed it too far into the future. You've got to strike while the iron is hot and all that.

While Pearl is as different from X both thematically and visually, the heart of both films revolve around the desire of the female protagonists (both played by Mia Goth) to rise above their stations in life to become a star. As can be expected from a horror movie, neither one's path goes the way that they want it to, but it's apparent that their drive for stardom is what fuels both Pearl and Maxine's actions in their respective films.

As a true origin story, Pearl not only gives the audience more insight into the creepy main character who turns back up in X, but it provides some context for her and Howard's actions in X. There are several nice Easter eggs for X in Pearl, but the film ends in such a way that we could definitely see a slew of films that further flesh out Pearl's murderous ways from 1920 to the 1970s.

I mean, it's not like Pearl's urges could be satiated for 50 years after the events of Pearl. I want to know about her journey over the decades and I'm willing to bet that A24 won't mind giving us what we want here. It's just a matter of whether West and Goth are up to the challenge.

I will say that there was one main lost opportunity on the physical release of Pearl. The teaser trailer for MaXXXine is nowhere to be found on the physical disc (unless it's a hidden Easter egg that I haven't found yet). But, don't worry, I've embedded it right here for you all.

As you can see, there isn't much to it, but it does seem to imply that we will be showcasing horror in Hollywood in the mid-1980s. With that period being such a lush feeding ground for horror films, it's anyone's guess how Ti West will approach it and what style it will showcase.

The barest of details about MaXXXine seem to indicate that the film will follow Maxine out to Hollywood about a decade after the events in X as she attempts to make it big as a star. Will she murder her way to the top? Will she finally get the big break that both she and Pearl have been yearning for over the decades?

Only time will tell.

As it stands, Pearl is a wonderful prequel follow-up to X that not only helps to provide context to the earlier film, but to break new ground in the horror genre as a whole. There aren't that many horror musicals out there, but West makes the case that we should be creating more of them.

Both films are great in their own right but taken as a whole, they both paint a fun picture of modern horror. They are both respectful of horror's past, but also blazing new techniques in how to quickly film and release these types of movies.

Very few production companies would take such a risk with an unknown property, but Mad Solar and Bron Studios back the risk and there's no better distributor for these films than A24. I've talked at great length about how impressive this distributor has been in terms of picking films and it goes to show just how far ahead of the curve they are with these two releases.

Pearl is now available on Blu-ray and DVD.