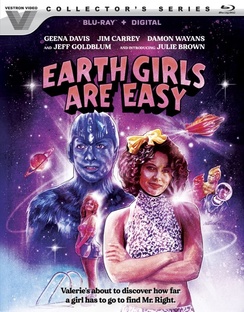 It's no secret that I absolutely adore the Vestron Video Collector's Series from Lionsgate. It doesn't hurt that I watched most of these films when they came out repeatedly.

But as we've detailed here numerous times, this Vestron series is taking these cult movies and giving them the red-carpet treatment they deserve. With the spate of streaming services popping up, there's a real void for films from smaller studios or boutique labels that no longer exist.

Many times, these films get lost in litigation (Dogma anyone?) and never see the light of day again. Sometimes, however, these movies get a boost thanks to the fine people at Lionsgate. The result is the Vestron series where not only are the films being made available again but they are loaded with bonus features that would make any fan cheer.

If youâre searching for an irresistibly fun cult classic with an out-of-this-world cast, youâve found it! Now available for the first time on Blu-ray, Earth Girls Are Easy follows the misadventures of three furry aliens â played by Jeff Goldblum, Jim Carrey, and Damon Wayans â whose spaceship crash-lands into a pool owned by Valerie, a valley-girl manicurist (Oscar winner Geena Davis). Befriended by Valerie and given human makeovers, the extraterrestrial trio embarks on a wild weekend filled with partying, police pursuits, and, yes, interplanetary love.

There was a brief period in the late 1980s and early 1990s when Julie Brown had her fingers on the pulse of cool and Earth Girls Are Easy is undoubtedly her Mona Lisa. Credited as co-writer and star of the film, Brown came up with the idea for the film and it's abundantly clear that her tastes are impeccable.

Combined with an amazing cast of young comedians on the way up, Earth Girls Are Easy is one of those films that I always had to watch when it came on. Over the years, it's fallen out of constant rotation on the cable stations and it has almost been forgotten by the current generation.

This is precisely why the Vestron series exists. It allows people to discover films that were popular before they were born. As I've discovered while introducing my daughter to horror classics, many of the movies made before 2000 aren't represented in equal numbers on the streamers.

Maybe it's the older feel of the films or the lack of clear rights holders, but there's a real dearth of classic films from the 1980s and 1990s on streaming. Case in point, Midnight Madness is a classic Disney film and a great family watch that holds up to repeat viewings. And yet, it still is not available on Disney+.

But I digress. We are talking Earth Girls Are Easy and all discussions on the film start and end with its amazing cast. Geena Davis in one of her early roles is perfectly cast as the valley girl (kids, look it up) looking for something more in her romantic relationships, but little did she know that she needed to look a little beyond our planet.

Jeff Goldblum, Jim Carrey and Damon Wayans play the colorful furry aliens only a single human makeover away from certified hotties. It's great to see these young comedians at their prime really selling out for the movie. It's one of those you need to see it to believe it type of situations.

Finally, the best part about the Vestron Series, other than being able to own these classics again is the copious amounts of bonus features they put on the discs. Not only do they include deleted scenes, featurettes, interviews, and an audio commentary, but they practically include everything and the kitchen sink.

It is enough bonus material to satiate even the most diehard fan of Earth Girls Are Easy. It provides a wonderful portal to a different time and place where movies were fun and more enjoyable than they had any right being.

Earth Girls Are Easy is now available on Blu-ray and it's well worth purchasing to own a film that hasn't been available to own for several years.