Review: 'Men' is uncomfortable and toxic, which is sort of the point 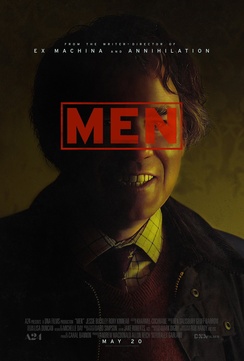 I'm not sure if there is a more interesting director working in film today than Alex Garland. He's quickly putting himself up there in the ranks of Fincher and del Toro and Lynch in terms of his unique visual style.

As a director, Men is his third film and is easily his most ambitious from both a stylistic and message standpoint. If Ex Machina was a treatise on artificial intelligence and Annihilation explored humanity's lack of understanding of extraterrestrial life, then Men would be the logical next step of introspection.

It is far from an easy watch and the subject matter is undoubtedly not mainstream-friendly, but that doesn't diminish the fact that Men might be one of the most important films of our times. With its many allusions to society's long-standing reliance on patriarchy whether through religion, politics or social interactions, Men puts forth a very solid argument on why now is the time to challenge our past.

In the aftermath of a personal tragedy, Harper (Jessie Buckley) retreats alone to the beautiful English countryside, hoping to have found a place to heal. But someone or something from the surrounding woods appears to be stalking her. What begins as simmering dread becomes a fully-formed nightmare, inhabited by her darkest memories and fears in visionary filmmaker Alex Garland's (Ex Machina, Annihilation) feverish, shape-shifting new horror film.

I should be clear up front that I'm not just some Alex Garland sycophant. I really loved Ex Machina, but I didn't have the same complete admiration for Annihilation. It wasn't the direction or the look and the feel that I didn't care for (they were superb), but it was more the story overall. I didn't like the book when I read it and it carried over to the screen version.

That said, I really felt that Men continued to showcase Garland's skills as a filmmaker and for telling complicated, uncomfortable stories. Because trust me, if you weren't uncomfortable watching Men, then you might want to check in with a Shrink and make sure everything is still copacetic upstairs.

Don't get me wrong, Men isn't for everyone. In fact, those that need to heed its message most probably won't watch it or will simply bash it online as being "too woke." Yep, it doesn't take much effort to see that this film is clearly split in the middle between those that truly appreciate the esoteric message behind the film and those that are confused.

What starts as a slow-burning tale of a woman seeking an escape to heal from a traumatic experience quickly unravels as toxic masculinity rears its ugly head. I mean Garland didn't sugar-coat or hide it - it's right there in the title, Men.

Society has been led by patriarchy since the dawn of time and it's becoming clear that this built-in toxicity is what needs to be addressed as we move forward as a species. Ever since Adam and Eve (if you're the Biblical sort), women have been treated as second-class citizens and even blamed for the downfall of man and the expulsion from Eden. There's even a pretty heavy-handed mention of such in the film.

Women have been the progenitor of the species as a man has never given birth to another human. And yet, that doesn't stop them from thinking that women are less than property or at least not equal in regard to men. This is made abundantly clear at every turn and from every character brought to life by Rory Kinnear.

Whether it's disguised as misplaced chivalry or something worse, it's inherently clear that this toxic masculinity is ingrained in our culture and something that needs to be rooted out before we can move beyond as a society.

So, why should you take the journey? Well, beyond the obvious answer that perhaps seeing this film will force us (both men and women) to have these discussions with one another, I have two big reasons: Jessie Buckley and Rory Kinnear.

To be frank, I wasn't well-versed in either actor's resumÃ©, but they both contribute star-making turns and will certainly be seen in more upcoming projects. Jessie is absolutely perfect as a not-so-damsel in distress who is more than capable of protecting herself.

Of course, why should anyone, male or female, be left to fend for oneself when that person's life is clearly in danger? The film postulates that a woman's life is far less important than property despite its life-bringing virtues. In fact, you could say that if it were solely left to men, things don't end well.

I won't spoil the ending as the third act is absolutely bonkers and right up there with mother! in terms of batshit crazy, but I will say that it's an ending that does offer some glimmer of hope if that's possible. It's faint and somewhat demure, but it really makes the effort worth it.

Again, I know that Men is not for everyone, but it's a film that really does need to be seen by wide swaths of the population so that we can start to get rid of this toxicity. It's going to take a long time and it will take more prodding than a single film where most people simply dismiss it as "confusing," but it's a direction we need to take if we are to survive as a species.

Only together can we move forward to a new period of enlightenment and equality. In today's supercharged society, it seems that every little thing is the proverbial straw breaking the camel's back. Do us all a favor and check out Men today and we can start the healing process.

Men is now available on Blu-ray and DVD.