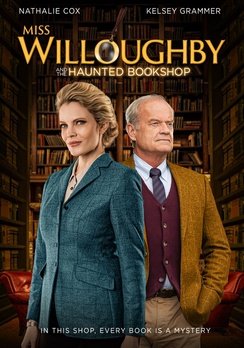 Welcome to Agatha Christie week, apparently. The English author is often recognized as "the world's best-selling author of all time" and this week is her time to shine. Not only is the big-screen adaptation of the Hercule Poirot thriller Death on the Nile coming out on Friday, but today's DVD debut of Miss Willoughby & The Haunted Bookshop plays like a plot out of one of her books.

While I did enjoy the Poirot books, I was always more fond of her female protagonist Miss Marple. So, it shouldn't come as much of a surprise that I enjoyed Miss Willoughby & The Haunted Bookshop which is a thinly-veiled homage to the late author's successful series of Marple books.

If you're unfamiliar with the Marple stories, think Murder, She Wrote. Miss Marple was an elderly spinster who would often use her homespun anecdotes to solve mysteries. Well, Nathalie Cox's turn as Miss Willoughby is anything but elderly or a spinster, but the spirit of the beloved Christie character shines through.

Move over Miss Marple, there's a smart, stylish new detective in town â meet Miss Willoughby! Orphaned as a child, raised by a family friend (Kelsey Grammer, "Frasier"), and skilled in strategy, literature, and martial arts, there's no case she can't solve. But even she is baffled when a longtime friend tells her that a ghost is haunting the bookstore she runs. Is someone playing a trick on the poor woman? Is it a hallucination? Or is something more sinister going on? Make some tea and settle in to watch this thrilling whodunit-adventure and find out!

A certain sizeable portion of the heavy-lifting in this film is taken on by Kelsey Grammer, who has seen his roles in films mainly gravitate to the affable elderly father-figure type. This typecast certainly holds in Miss Willoughby & The Haunted Bookshop as Grammer raises the aforementioned titular character after her parents die when she is a child.

As you can see there's already a lot going on in Miss Willoughby and I remain unconvinced that this material might have been better served in a more serial format such as a limited series on Netflix or the like. I mean, I imagine that the hope is that Miss Willoughby will find an audience and reach a certain level of success that will allow the film to be sequelized into several new movies.

Generating that level of success and buzz for a direct-to-video movie will be difficult, but I think a vanity streaming show would have made the options more plentiful. But, who knows, maybe Miss Willoughby & The Haunted Bookshop will serve as the launching point to an eventual series in the coming years. You just never know these days.

As it stands, Miss Willoughby & The Haunted Bookshop is a serviceable whodunit that is bolstered by strong performances from Cox and Grammer. The pair also starred together in Father Christmas Is Back and their chemistry is such that I could easily see them continue to play these roles for several more years.

Personally, I thought Nathalie Cox's turn was radiant, but I'm a sucker for a strong female detective who isn't afraid to use wits to solve the mystery. Her Miss Willoughby is a strong mix of what I'd imagine Nancy Drew or Enola Holmes would become later in life. And yet, Miss Willoughby isn't really that much older than these two detectives.

In other words, Miss Willoughby provides a natural stepping stone for female viewers looking for positive role models before they turn their sights on to Jessica Fletcher or the aforementioned Miss Marple. I really hope that there are further adventures in this series, whether that's in movie form or some other serialized format.

Miss Willoughby & The Haunted Bookshop is now available on DVD.