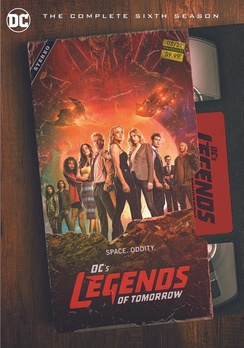 It's funny, for every misstep that DC makes on the big screen, they continually deliver satisfying entertainment on the small screen. A lot of that success certainly falls in the hands of uber producer Greg Berlanti and his Arrowverse stable of TV shows on The CW, but it's like he has the Midas touch and it doesn't appear to be dissipating anytime soon.

One show that has certainly found its fanbase is DC's Legends of Tomorrow. An ensemble superhero show that tries to be DC's answer to Guardians of the Galaxy on the small screen, Legends of Tomorrow takes the best of several shows before it to create a little bit of escapism that we all need more of these days.

With Season Six, the show decided to unleash a power so great that I got to recycle one of my favorite gifs.

That's right, the villains in Season Six are none other than aliens. And while that might seem odd compared to the last few seasons where they were able to spend time with the villains and their emotional journey, this season's detachment of the villains allowed the showrunners to spend that time on the core group of good guys.

And it certainly paid off dividends for the show.

Having spent last season trying to track down the Loom of Fate, the Legends must now save history from a foe like none they've encountered in the past or future. The timeship Waverider's crew have dealt with monsters, time anomalies, and most recently, villains from Hell, but this season they will face something even more challenging and bizarre ... space aliens!

As you're aware, I was late to the party for Legends of Tomorrow, but since Season Four, I'm all in. Last season was a wonderful way to loop in history to the show and I was pleasantly surprised to see them continue this with cameos in Season Six from historical figures like David Bowie and Amelia Earhart.

The alien antagonists along with Bishop keep the Guardians' hands full as they both try to eradicate the aliens from the timeline and rescue Sara. Alternately, the season spends a great of time with Matt Ryan's Constantine as he struggles with his dark side and the magic that is literally consuming him.

I was a fan of the Constantine show on NBC before it was unceremoniously dumped after one season. So, when the CW brought the character (and same actor) over to Legends of Tomorrow, I was ecstatic to continue this journey. It certainly hasn't disappointed and has only give more texture and complexity to Legends of Tomorrow.

The one thing that Warner Bros. does well in its TV presentations is the included bonus features. Most TV offerings from other studios are barebones and lack many if any bonus features. Not only do the physical configurations include an exclusive gag reel and deleted scenes, but there are several featurettes that truly add value to your purchase.

Whether you're a diehard fan of Legends of Tomorrow or a noob like me, you will find great value on this offering and I absolutely recommend watching it as soon as you can. You'll laugh. You'll cry. You'll end up bowling against aliens.

Legends of Tomorrow: Season Six is now available on Blu-ray and DVD.