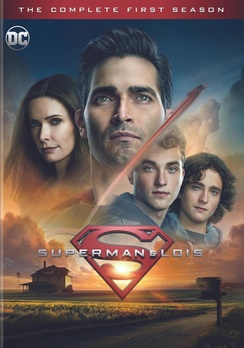 Welcome to Superman week on the site. I jest (a bit), but this week really does feel like a celebration of all things Kal-El with the Blu-ray release of the complete series of Smallville and the first season of Superman & Lois.

While this timed release probably isn't a coincidence given that they are both being handled by Warner Bros. Home Entertainment, they do provide the perfect bookends of life as a superhero away from the hustle and bustle of Metropolis.

I will offer my thoughts on Smallville in a bit, but this review is centered on Superman & Lois: The Complete First Season. This new show enters the Greg Berlanti universe on The CW and continues to push the envelope for these DC-centered properties on the small screen.

After years of facing supervillains, monsters, and alien invaders intent on wiping out the human race, the world's most famous superhero (Tyler Hoechlin) and comic books' most famous journalist (Elizabeth Tulloch) come face to face with one of their greatest challenges ever â dealing with all the stress, pressures and complexities that come with being working parents in today's society.

You will have to forgive my ignorance as I'm not really a comic book junkie. I know somewhere my former boss is cringing at that omission, but my life is all about filmed entertainment on both the small and big screen. Sadly, there are only so many hours in the day.

So, from a filmed perspective, they haven't focused much, if at all, on the idea of Superman being a husband and a father. I'm sure there are plenty of comic books devoted to Daddy Supes, but it's rather taboo in film and TV - until now.

To be honest, this is the story about Superman that I didn't know I needed. It seems that until now, they have explored the idea of Superman wrestling with his human nature, but not as a father, which only makes sense as the next frontier to explore.

Obviously, Kryptonians have children, er had children and raised them before Krypton was destroyed, but Clark Kent was raised by human parents on Earth. Therefore, there's plenty of material there to play with as he and Lois have children and must confront all of the typical and atypical issues that come up when raising a couple of half-aliens.

Naturally, Clark had two shining examples of parental love in Jonathan and Martha Kent, but they are both deceased as the show begins. We know that Jonathan died when Clark was a teen, but Martha's death sets forth the motions that result in Lois and Clark deciding to move to Smallville to raise their children, Jonathan and Jordan.

And yes, Superman's kids are both named after his two fathers, Jonathan and Jor-El.

Early on in the pilot, one of the kids starts to manifest powers that he has inherited from his dad and the secret of their paternal is pretty much out of the bag after a bit of exploring by the kids results in them finding Kal-El's spaceship.

This iteration of Superman is one that has already lived as the Man of Steel and must now face the ultimate human behavior, trying to balance work and family. While the scope of the show is a bit limited to its small town setting, there are always threats to be had. At the same time, the creators made sure to keep him and Lois busy with enough local threats to keep even the most ardent action junkie happy.

One of the most noticeable differences that sets Superman & Lois apart from its CW brethren is the cinematic quality of the series. The show doesn't feel like a TV series at all. It has all of the cinematic trappings of a big screen production. Everything from the aspect ratio to the scene framing is more akin to what you'd see on the big screen and less so hoky TV sets.

The show has a grand feel to it that immediately resonates with the viewer. We don't feel as though we are watching 15 one-hour episodes, but rather a grand epic of historic proportions. It feels like a massive film and they have brought along the talent to boot.

Besides leads Tyler Hoechlin and Elizabeth Tulloch, who originated these characters in this Berlanti universe in Supergirl, they brought in screen vets Emmanuelle Chriqui and Dylan Walsh to give the series a bit of gravitas.

In particular, Emmanuelle Chriqui as Lana Lang is particularly inspired casting. Anyone familiar with Smallville knows that she and Clark had quite a history, but her backstory is a bit different here. And yet, we are left to wonder if this isn't an interesting piece of fertile storytelling that they will dip into as the show progresses.

In the end, the fifteen episodes move quickly and the story is better for it. It will be interesting to see if the creators are able to keep this same intensity as the show continues to evolve. It was given a green light for season two almost immediately after it debuted, but I have a strong feeling that there isn't a particular set of seasons or stories already planned out.

The good news is that there's plenty of options for them to explore in coming seasons. I just hope that they know when to pull the plug. There's nothing worse than a show that has gone on past its expiration date simply existing to push forth recycled storylines and half-baked plots.

So far, Superman & Lois is a wonderful watch and well worth the investment. It seems that Mr. Berlanti has another hit on his hands and we are all the better for it.

Superman & Lois: The Complete First Season is now available on Blu-ray and DVD.