Review: 'Inglourious Basterds' is a piece of cinematic art on 4K UHD 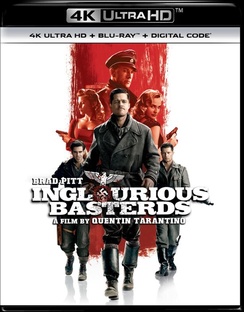 I think I've bought Inglourious Basterds at least three times over the years. When it was announced for a 4K UHD release, I chalked it up as a foregone conclusion that I was on the hook for another version.

Thanks to the good folks over at Universal Home Entertainment, I didn't have to pony up my own money this time, but I would have paid double the retail price to own this Quentin Tarantino masterpiece in the best format available.

In case you've been living in a cave for the last decade, here is the synopsis of Inglourious Basterds. In German-occupied France, Shosanna Dreyfus witnesses the execution of her family at the hand of Nazi Colonel Hans Landa. Shosanna narrowly escapes and flees to Paris, where she forges a new identity as the owner and operator of a cinema. Elsewhere in Europe, Lieutenant Aldo Raine organizes a group of Jewish soldiers to engage in targeted acts of retribution. Known to their enemy as "The Basterds," Raine's squad joins German actress and undercover agent Bridget Von Hammersmark on a mission to take down the leaders of The Third Reich. Fates converge under a cinema marquee, where Shosanna is poised to carry out a revenge plan of her own...

As I was doing research for this review, I came across the original trailer for Inglourious Basterds. It's slightly different from the one above, but it included a rather curious title title card: "Once Upon a time... In Nazi-occupied France."

When we first saw those words in 2009, we didn't even think twice about them. After we saw the movie, it made sense that Inglourious Basterds was basically Tarantino's fairy-tale version of the events of World War II in Europe.

Flash-forward a dozen years or so and suddenly you gain a fond new appreciation for the long-game that Tarantino was aiming for. I have no idea if Once Upon a Time in Hollywood was even a notion in his noggin, but you'd have to think that in retrospect the parallels between the two films are undeniable.

A deep dive into the "Fairy Tale" collection of films from Quentin Tarantino is in order, but this is not the time or place for that. Besides, I'm sure many others smarter than I have gone down this rabbit hole and I'll defer to their expertise.

What is telling though is that it seems that Tarantino's fascination with myth and storytelling as it relates to the historical record is a major theme in his latest films. As he's mentioned recently that his upcoming tenth film will be his last, it will be interesting to see if this loose interpretation of history will factor into it.

But that's all a long way from the review of Inglourious Basterds on 4K UHD. Out of all of Tarantino's films, this is the one that I was most looking forward to seeing in the latest format. I've given up all hope of ever seeing Django Unchained or The Hateful Eight on 4K due to the ongoing rights issue over the whole Weinstein affair.

But Universal Home Entertainment has had the home entertainment rights to Inglourious Basterds ever since its first release and I figured it was only a matter of time until we saw it appear. The wait was excruciating but well worth it. Inglourious Basterds has never looked or sounded better and this is truly the definitive version that every Quentin Tarantino should own.

The HDR10+ transfer of the film captures the robust color palette in a way that leaves the Blu-ray version lacking. As with all of Tarantino's films, Inglourious Basterds is filmed in rich detail that is finally seeing the light of day for the first time since its theatrical release.

There are several scenes at night that provide unmatched detail and impressive blacks in the shadows. In particular, the difference in the culmination in the theater scene is so stark that you will be questioning why you even settled for the Blu-ray in the first place. And then there's the baseball bat scene.

The new DTS-HD audio track captures all of the gore and uneasy distress in all its unsettling glory. The ultra-violence in this scene and the rest of the movie is vibrant and truly pops off the screen. The 4K UHD truly does present the viewer with Tarantino's vision of the film and it's definitely a violent one at that.

If you're like me, there might be some trepidation in buying this movie again, but trust me, it's worth it. The 4K UHD includes all of the bonus features of the previous Blu-ray version and comes with a Blu-ray and digital copy. So, you can soften the blow of the new purchase by selling off your current copy. 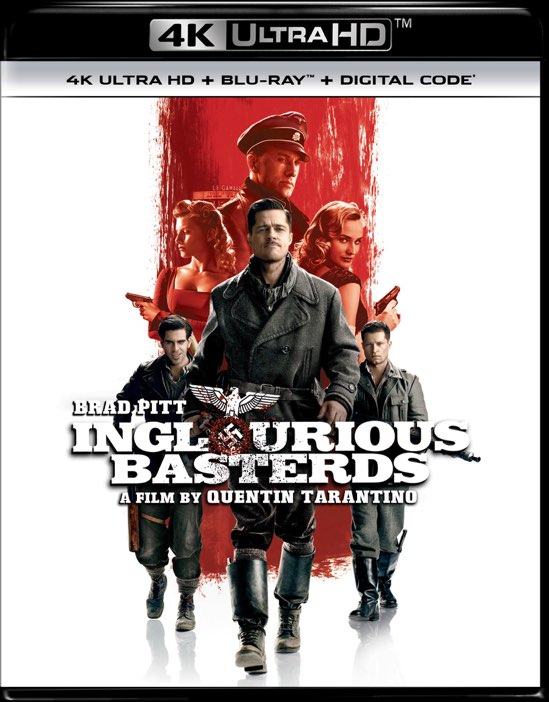