Review: 'The Doorman' cashes in on action nostalgia 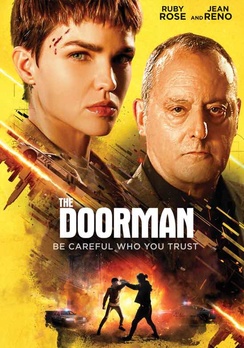 You know what they say, imitation is the highest form of flattery.

Back when Die Hard debuted in theaters in 1988, it didn't take long for every movie studio in town to try and rip off that highly successful formula. During the 1990s, it felt like a Die Hard clone came out every month.

Naturally, the fad went away, and new films rose up to take its place. These days everyone wants to make the next 165540{John Wick and so the cycle continues over and over again.

With The Doorman, the filmmakers decided to take a page out of John McClane's playbook instead of the latest flavor du jour. And it was a great decision.

Ruby Rose stars as a former marine with baggage who returns to the states to try and get a fresh start. When that new beginning crosses paths with art thieves intent on recovering priceless paintings at any cost, the marine is forced to call upon her skills before her sister's family pays the ultimate price.

It's no secret that I've been a fan of Ruby Rose for a long time. Finally, she was given a chance to showcase her action skills in Batwoman and it seems that it was a great fit. While her future on that show has been cut short, their loss is film's gain.

The Doorman gives Ruby a great chance to establish herself as an action icon by giving her best John McClane impersonation. She takes the opportunity and runs with it with perfect aplomb. She knows that she's in a campy action flick and she goes all out.

While Ruby is given the hero role, Jean Reno is beautifully cast as her equal on the other side. I've loved just about everything that Reno has been in, but I especially enjoy those movies in which he's able to go full crazy. The Doorman gives him plenty of rope to channel his inner Hans Gruber and he fully embraces it.

While the action in the film is as predictable as the film to which it pays homage, that's not the point. The point is that The Doorman is meant to be a mindless action movie that will bring joy to its audience. Critics will be sure to pan the film, but I don't think that will faze The Doorman.

No, The Doorman is one of those feel-good critic-proof movies that audiences always embrace. The fact that they took the same old Die Hard and flipped it with a female protagonist will surely win raves with Ruby's great performance.

That's not to say that the film is without its faults. The character of Max is mostly annoying, but he always happens to know the secret passage or the location that helps to move the plot forward. His character might have been great comic relief under the guise of a better actor, but it's just a wasted opportunity.

If you're looking for a good old-fashioned action romp, there are far worse options out there. The Doorman will ticklet your Die Hard sweet tooth in ways that you have long forgot. In these crazy COVID times, I fully expect The Doorman to have no trouble in finding a rabid audience.

The Doorman is now available on Blu-ray and DVD.