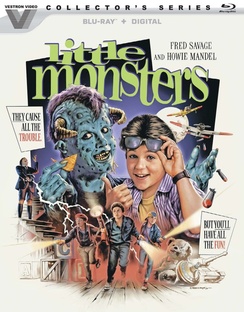 While streaming seems to be all the rage these days, people seem to gloss over its limitations. Setting aside reliable Internet connections and speed, the biggest flaw of any streaming network is content holes.

With the proliferation of streaming choices, the streamers themselves are migrating over to content creation versus content aggregation. The Amazons and Netflixes of the world will always have rights to certain third party content, but their focus has shifted to their original programming.

While new choices such as Disney+ and HBO Max have opened up long-dormant films that have been collecting dust on the proverbial digital shelves, there are still plenty of great content with no streaming outlets. One such property is a film that combined my burgeoning love of horror and adolescence, Little Monsters.

This 1989 film was what I would call an edgy PG film that tried to bridge the gap between the lucrative horror industry of the 1980s and young tweens on the cusp of being reliable customers. The film starred Fred Savage, who was arguably the hottest property on TV thanks to the debut of The Wonder Years the year before, and an unrecognizable Howie Mandel.

Fred Savage plays Brian, a sixth-grader who has just moved to a new town, who befriends a monster that lives under his bed. This friendly monster introduces Brian to the fascinating world of monsters and just as he thinks it's too good to be true, he finds out that there's always more than meets the eye.

I thoroughly enjoyed Little Monsters when I was a young teen and while it only made about $800,000 at the box office, it developed a cult following on cable TV. The film was financed by Vestron Pictures and thanks to Lionsgate's Vestron Video Collection line, a brand new audience is able to discover Little Monsters.

Two of those new viewers were my own children and I was ecstatic to be sharing this experience with them. At first, they were hesitant because they thought it might be too scary for them, but with a little provocation on my part, we waded in.

To say they loved it would be an understatement!

The first thing they both commented on was how similar Little Monsters was to Monsters, Inc., a film that would come out a little over 20 years later. After explaining to them that no this film did not "rip off" Monsters, Inc., they were impressed by how similar the two films truly are.

This isn't a novel comparison as you can find legions of online discussion about the similarity between these two films. There are sides and a line drawn in the sand, but I'm going to muddle this review with all of that. Suffice to say, I think it's safe to say that the team behind Monsters, Inc. were fans of Little Monsters and some of their passion for the earlier film may have carried over into the classic Pixar film.

My son commented that this was the "perfect film for Halloween" and my daughter concurred. I can't argue with their fine taste. This Vestron Video release is perfectly timed to both take advantage of the upcoming spooky holiday and the dearth of product in the marketplace thanks to COVID-19.

Little Monsters was previously available on DVD, but it has been out of print for over 10 years now and as I mentioned above, it is not readily available on any of the major streaming services. In other words, this film should thrive on home entertainment over the coming weeks.

Not only is the film worth owning on its own merits, but the tricked out version put together for this Vestron release truly is awe-inspiring. If you're a fan of the film like I am, you will relish the cornucopia of brand new special features that Lionsgate has added to the disc.

There's a new interview with Howie Mandel and newly uncovered vintage interviews with Fred Savage and his brother Ben, who actually plays his brother in the film. There are new commentaries and interviews along with older featurettes that truly make this a purchase more than worth its price.

Little Monsters is a film that showcases everything that we love about the late '80s and early '90s and it more than stands the test of time. I thoroughly enjoyed introducing my kids to a film that helped to shape my movie tastes for many years to come.

So whether you're a dye-in-the-wool Maurice fan or this is your first viewing, you will definitely want to pick up the Vestron Video collection edition of Little Monsters. It satisfies the whole year round, but it's a great evergreen watch during the Halloween season.