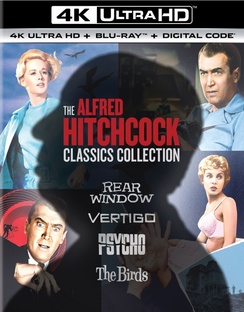 There are few filmmakers that have made a bigger impact on American film than Alfred Hitchcock. While he was known as the "master of suspense," Hitchcock was a terrific all-around filmmaker that influenced young movie makers for half of a century and counting.

And yet, until today, none of his films have made the jump to the best home entertainment format. With The Alfred Hitchcock Classics Collection Universal Home Entertainment has rectified this injustice.

Featuring four of Hitchcock's arguably best films, The Classics Collection not only delivers them in pristine quality but also with all the bells and whistles befitting an American master. With over 17 hours of content, you will not be left with buyer's remorse by upgrading your collection.

While all four films are classics, the real headliner here is Psycho which happens to be celebrating its 60th Anniversary today. On September 8th, 1960, Psycho hit theaters, and horror films were changed forever.

For the first time ever, the original uncut theatrical version that debuted 60 years ago in theaters is now available in this collection. Not only that, but it has also been given the 4K treatment and Psycho has never looked better.

While there are better 4K transfers in the collection (Rear Window and Vertigo), it's hard not to be impressed with this horror film in 4K. In particular, the newly enhanced audio track, while not Dolby Atmos, is still spectacular and is particularly evident in the iconic shower scene.

It's always hard to compare Alfred Hitchcock to contemporary directors because while you could argue that only someone like Steven Spielberg has the film resume to come close to Hitchcock's influence, Spielberg doesn't have the TV cred to match the master. I suppose the most well-rounded filmmaker to come close to matching Hitchcock is J.J. Abrams.

Granted, Abrams hasn't accomplished anywhere near what Spielberg and Hitchcock have, but his resume comes close to matching the variety of Hitchcock's. If Abrams continues to enjoy the success that he has up to now, it's possible that he might come to rival Hitchcock's immense influence.

Another director that rivals Hitchcock's swagger would be Christopher Nolan. After seeing Tenet, any lingering doubts as to his lasting impact on film have evaporated. Additionally, I think that Hitchcock would be a Nolan fan and if they were peers working at the same time, their rivalry would bring out the best in one another.

But make no mistake, there is no one that holds a candle to Alfred Hitchcock and as The Classics Collection proves, he was ahead of his time. And now, finally, the technology has caught up with the Master and you can start to convert your Hitchcock collection to 4K UHD.