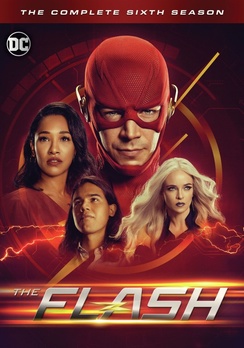 While Arrow was the progenitor of CW's highly successful "Arrowverse" slate of TV shows, there is little debate that The Flash is the show with the most mainstream appeal. Perhaps, it has something to do with the whole being a full-fledged member of the Justice League or having his own set of underoos, but there's no denying the drawing power of The Flash.

It also doesn't hurt that they hit a home run when they cast the show either. Grant Gustin has become a household name thanks to the success of the series and surrounding him with established acting stars such as Danielle Panabaker and Tom Cavanagh is just further proof that a strong cast can lead to TV glory.

The Flash hasn't shied away from exploring the more intriguing limits of Barry Allen's powers such as time travel or the more outlandish villains. I mean they continue to bring King Shark to the small screen and it's not completely ridiculous. No, the strength of The Flash has always been its willingness to embrace its comic book overtures while staying true to the family nature of the character.

While Season Five did a deep dive into family matters, Season Six got back to basics after the departure of Nora. The main thrust of the first half of Season Six was Ramsey Rosso aka Bloodwork and his pursuit to end all death, while the second half was a bit more whimsical with its focus on the Mirrorverse. In the middle, a massive five-part crossover event called Crisis on Infinite Earths brought all five Arrowverse series together for an epic must-see TV extravaganza that is still being talked about by fans everywhere.

There is a reason that The Flash is the highest-rated show on the CW and that's primarily due to the hard work the showrunners put in to flesh out the characters and storylines. This season was always going to be a challenge with the Crisis event in the middle of the season, but I thought they made a valiant choice to sort of split the season up into two arcs.

I loved seeing Sendhil Ramamurthy return to superhero television after his run on Heroes, although in a much different role. I enjoyed his good-guy portrayal on Heroes, but I have to say that his villain role here is even better.

And that brings us back to the biggest struggle with Season Six, COVID-19. The original order for Season Six was 22 episodes, but thanks to the shutdown due to the coronavirus only 19 episodes were produced. I think the showrunners did their best to tie up threads, but it just felt like there was a hole missing and thanks to ongoing delays, we won't know how everything is resolved until 2021.

One interesting arc that I hope they weave back into the show involves Bloodwork. It seemed like the second half arc was setting up a big finale, but that mostly had to be scrapped thanks to the pandemic. Anytime a show can get Sendhil Ramamurthy to return is A-OK in my book.

The second half of the season also focused more on Iris and it really placed an emphasis on what is quickly becoming an unheralded strength of The Flash, its ensemble cast. Whether it's Danielle Panabaker or Tom Cavanagh or Candice Patton, the show is much more than Grant Gustin and that's what really separates the Arrowverse from other comic book shows on TV.

A strong cast is able to raise the level of those around them and it's what makes the crossover events so successful. When you have this many talented people coming together to create something they all believe in, it elevates the end product and that's the true secret sauce for these shows.

Overall, the work that was put into Season Six was amazing, especially given the unique pandemic situation that brought everything to a premature stop. As with all DC home entertainment packages, the Blu-ray is absolutely jam-packed with goodies and the black-and-white version of "Kiss Kiss Breach Breach - Noir" was pretty cool to see.

They also include all five crossover episodes on each collection so that you don't miss any of the continuity and you aren't forced to buy five complete collections if you happen to not want to. It's a nice value-added touch and it really separates the DC offerings from their peers.

The Flash: The Complete Sixth Season is now available on Blu-ray and DVD.