Review: 'The Outsider' is a grand slam of chills and thrills 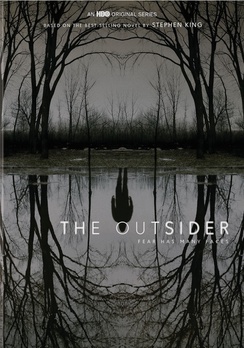 Unfortunately, there is going to come a day when this Earth will no longer be home to Stephen King. Sadly for the 72-year-old author, that day is going to be upon us sooner rather than later.

With this week's spate of celebrity deaths, it really hits home that our heroes are truly mortal and one day they will cease to exist. The adding of years to his age hasn't slowed down the prolific writer one bit and our entertainment options are forever grateful.

There has been no shortage of adaptations of his work over the years, but it really does feel like we are hitting peak Stephen King time. With Castle Rock, It and Mr. Mercedes all dominating our entertainment options lately, sometimes it feels like it's a Stephen King and we all live in Maine.

It's this last property that really gave birth to The Outsider. The three novels that comprise the Mr. Mercedes series introduced us to Holly Gibney, an unorthodox private investigator and, quite possibly, my favorite Stephen King character ever created.

Following the events of the Mr. Mercedes series, a young boy is found mutilated in the woods and what appears to be an open-and-shut case goes sideways when contradictory physical evidence places the main suspect both in town and hundreds of miles away at the time of the killing. Holly Gibney is called in to help in the investigation and is it possible that the recent murder is somewhat related to the evil that she previously survived?

Obviously I am biased, but Stephen King is one of my all-time favorite authors and his work seemingly only gets better with age. He is truly gifted in the way that he is able to prey upon the fears of the reader and create a feeling of dread unlike no other.

Often, his adaptations into movies have been watered-down and fail to connect with audiences in much the same way as his novels. The invention of the limited series format has been a god-send for Stephen King. Now, instead of trying to condense his behemoth books into a svelte two-hour film, the limited series allows filmmakers to properly take the time to set the tone and ambiance that will truly titillate the audience.

You are certainly not lacking for Stephen King content, but unfortunately I think The Outsider was overlooked when it debuted on HBO at the beginning of this year. And then it was lost in the crush of HBO Max's debut. Which means that Blu-ray and DVD is the perfect venue to enjoy this masterpieces.

It stars two phenomenal actors in Jason Bateman and Ben Mendelsohn and they are both at the top of their respective games. It's refreshing to see Bateman take on these darker roles that are very much against the type of comic family man that has built his career. Mendelsohn is always wonderful, but he's given a chance to deliver an emotional performance that is second to none.

And that brings us to Cynthia Erivo.

Cynthia was an award-winning performer before she landed two Oscar nominations for Harriet. Now, she is proving that her acclaim is well-earned and her performance as Holly Gibney is spot on. It's a bit uncanny as the character is actually played by a completely different actress in Mr. Mercedes, but they each bring their own wonderful take on the character.

Cynthia's Holly is perfect for The Outsider and I only hope that we get to see more of her in the role as Holly Gibney is quickly becoming a star in Stephen King's universe of characters. There is so much more that we want to know about her, but given that any single character in a Stephen King work doesn't have much in the way of life expectancy, this might be a foolish wish.

In the midst of the COVID pandemic, our entertainment choices are dwindling, but releasing TV or streaming content on physical media seems to be a viable business decision. Not only are you introducing the product to a new audience, but you allow fans like me to permanently add this deserving series to my collection.

If you haven't checked it out yet now is your chance. The Outsider is now available on Blu-ray and DVD.