Review: Jay Pharoah shines with his '2 Minutes of Fame' 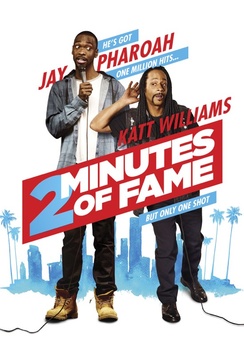 This week is an interesting one when it comes to SNL alum. Jay Pharoah, who starred on the sketch comedy show for six seasons, and Pete Davidson, a current SNL cast member, both had new movies debut this week and they couldn't be more different.

The King of Staten Island finds Pete Davidson playing a version of himself in Judd Apatow's latest film that is surprisingly more dramatic than his work on SNL and forces Davidson to face the ghosts in his past. Pharoah, on the other hand, plays a character that is more familiar to his SNL fans in 2 Minutes of Fame.

They both turn in remarkable work and showcase the efforts of SNL lately to not just churn funny comics, but also well-rounded actors.

In 2 Minutes of Fame, Pharoah plays Deandre, an aspiring stand-up comic with a host of hilarious impressions, but no audience to speak of outside of customers at the grocery store where he works. After one of his impressions of a famous comedian/actor goes viral, Deandre is invited out to L.A. to compete in a prestigious comedy showcase, but he has to choose between following his dreams of being a stand-up guy for his family.

It becomes readily apparent early on that 2 Minutes of Fame is little more than a showcase of Jay Pharoah's talents and that's perfectly fine. I was a big fan of the comic during his tenure on SNL and I welcome the chance to see him hone his craft.

While I'm not intimately familiar with his journey and struggles, I could imagine that his path to stand-up glory might have been as trying as Deandre's. At some point, every comic either gets their big break or they don't. For Pharoah, his break came when he was cast on SNL and a built-in audience got to enjoy his work each week. For Deandre, his path to success is a little more complicated.

While the main story of 2 Minutes of Fame is Deandre's struggle for success, there's a rather tried and true plot that involves family life and making difficult decisions. Dandre's girlfriend is more interested in Deandre becoming a stand-up guy for his son and giving up on his dreams long enough to provide for their family.

The struggle between one's dreams and the reality of life is one that has played out on the big screen over and over again, but there's a reason that it keeps showing up. It's one that is never easy to navigate and the pathos that the protagonist feels along the way is ripe for cinematic glory.

Unfortunately, 2 Minutes of Fame doesn't really get too heavy with the struggle, save for a side plot of an attractive woman potentially throwing a wrench into Deandre's very comfortable life. No, this film plays it safe and really allows the audience to focus on the comedy without worry of consequences.

It works in the context of this film, but now I want to see a more dramatic version where Deandre is forced to make a choice between his family and his dream. I am confident Jay Pharoah can convey this sort of anguish convincingly and that truly is the next step for his career that I look forward to seeing.

Much like his SNL pal Pete Davidson, Pharoah has his eye on the proverbial ball and I see 2 Minutes of Fame as a satisfying step on Jay's longer trajectory. It is hard to project where his next project will take him, but I am hoping to see something that shows his range a bit. A semi-serious role might be just what it takes to get Jay to the next level.

His impersonations will always be there, but if he aspires for Hollywood longevity, he has to prove that he's more than a one-trick pony. I see his potential and believe that his future is indeed bright. For now, this is a fun fan service film that will surely appease his many fans.

2 Minutes of Fame is now available on DVD.